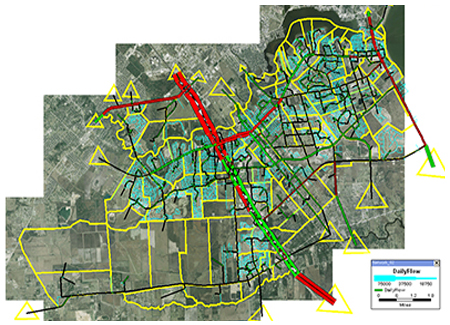 The travel demand forecast model was designed and calibrated to a base year (2007, in the instance of League City). This calibration process required adjustment of the model parameters until travel behavior resembled observed behavior in the area.

Following the model calibration, forecasted demographic and employment data were inputted into the model and behavior parameters calibrated in the base year were applied to the forecast year data. The model was then used to predict likely future travel conditions. These future travel conditions considered the characteristics of the future year transportation system (League City: year 2035). The future characteristics included new roadway construction, intersection capacity improvements, and introduction of a new travel mode.

For the League City model, the transportation network was developed from US Census Tiger-Line maps and data from the Houston-Galveston Area Council (H-GAC), and League City.

The data provided by the H-GAC contained the regional traffic analysis zone system, the regional highway network; zonal demographic and employment data; trip tables showing trips with one end of the trip in League City and the other end outside of League City. In addition, traffic volumes were downloaded from the H-GAC web page.

The results of the developed model were summarized in a report and submitted to the City of League City. The report also provided instruction on how to install and run the model as well as providing recommendations on continued model refinements and maintenance.